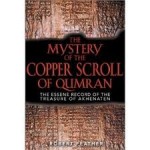 THE MYSTERY OF THE COPPER SCROLLS OF QUMRAN

Throughout this book the authors explorations links the scroll to the Ancient Egyptian king Akhhenaten, The priests of Aten, the Essenes and the location of the hiding places of the lost treasures of Amarna, confirming a long suspected influence of this pharaoh’s religious beliefs on those of the Hebrews. The famous Dead Sea Scrolls compromise the oldest collection of Biblical documents ever discovered. Of the Dead Sea Scrolls, none has baffled experts more than the 2,000-year-old Copper Scroll, discovered in 1952 by a team of Bedouin led by Henri Contenson of the Ecole Biblique in Eastern Jerusalem. Appearing to be a list of buried treasure engraved on copper pieces, the Copper Scroll is considered to be the work of a highly secretive Jewish sect of devout Essenes, who lived by the Dead Sea around the time of Jesus. No one has been able to explain its meaning or discover any of the 64 locations where the biblical treasures it lists were buried. Now Robert Feather, combining his scientific background as a metallurgist with his journalistic expertise, has unravelled the enigma of the Copper Scroll in a fascinating study that takes the reader on a journey to  the ancient Egyptian island of Yeb (modern day Elephantine), Lake Tana, Ethiopia (home of the Falasha Jews), ancient Mesopotamia, through Canaan, into Egypt and back to the shores of the Dead Sea. Fascinating reading which is full of intrique.       Author:  Robert Feather Publisher: Bear & Company Isbn: 9781591430148

HERETIC: The Life and Death of Akhenaten

Heretic: The Life And Death Of Akhenaten a fiction written  by Brijit Reed is a pleasant  informative rollacoaster for any amateur Egyptologist who wants to obtain background information on the life of Akhenaten,  the 18th Dynasty and the Amarna period. This story uses factual information about Ancient Egypt: Death and Mummification, religious practices and Tutankhamen’s life story and death  to educate the reader. As an added bonus the author has even managed to introduce romance to the tale  in order to set the scene for the reader and to take them on the journey that Akhenaten took.  A very informative and enjoyable read……..
Available on kindle  http://www.amazon.com/Heretic-Life-Death-Akhenaten-ebook/dp/B009H6R8GC/ref=sr_1_1?s=books&ie=UTF8&qid=1354795456&sr=1-1&keywords=Heretic%3A+The+Life+And+Death+Of+Akhenaten  Author: Brijit Reed 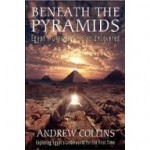 In this book Andrew Collins has divided the writing into four sections. The first section discuss Edgar Cayce, his psychic material relating to  ancient Egypt and the undiscovered Hall of Records presumed to be in the vicinity of the Sphinx.  The second part looks at the  Ancient Egyptian myths about the underworld. Mr Collins also brings in  the discovery of an ancient well in the southeast of the Giza area which is reputed to lead to underground tunnels. The third section takes another look at Collins’ theory of the  mapping of the Cygnus stars onto the Giza plateau and the geometry present at Giza. In the final section Andrew Collins talks about the caves that where discovered benath the Great Pyramid. Author: Andrew Collins  Publisher:ARE Press ISBN9780876045718 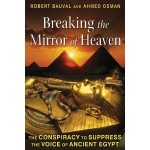 BREAKING THE MIRROR OF HEAVEN: The Conspiracy to Suppress the Voice of Ancient Egypt

This book exposes the many cycles of monument destruction and cultural suppression in Egypt from antiquity to the present day – Details the vandalism of Egyptian antiquities and suppression of ancient knowledge under foreign rulers who sought to cleanse Egypt of its “pagan” past – Reveals the real reason behind Napoleon’s invasion of Egypt: Freemasonry – Shows how the censorship of nonofficial Egyptology as well as new archaeological discoveries continued under Antiquities Minister Zahi Hawass Called the “Mirror of Heaven” by Hermes-Thoth and regarded as the birthplace of civilization, science, religion, and magic, Egypt has ignited the imagination of all who come in contact with it since ancient times–from Pythagoras and Plato to Alexander the Great and Napoleon to modern Egyptologists the world over. Yet, despite this preeminence in the collective mind, Egypt has suffered considerable destruction over the centuries. Even before the burning of the Great Library at Alexandria, the land of the pharaohs was pillaged by its own people. With the arrival of foreign rulers, both Arabic and European, the destruction and thievery continued along with suppression of ancient knowledge as some rulers sought to cleanse Egypt of its “pagan” past. Exploring the many cycles of destruction and suppression in Egypt as well as moments of salvation, such as the first registered excavations by Auguste Mariette, Robert Bauval and Ahmed Osman investigate the many conquerors of Egypt through the millennia as well as what has happened to famous artifacts such as the Rosetta Stone. They show how Napoleon, through his invasion, wanted to revive ancient Egyptian wisdom and art because of its many connections to Freemasonry. They reveal how the degradation of monuments, theft of relics, and censorship of ancient teachings continue to this day. Exposing recent cover-ups during the tenure of Antiquities Minister Zahi Hawass, they explain how new discoveries at Giza were closed to further research. Clearing cultural and historical distortions, the authors reveal the long-hidden and persecuted voice of ancient Egypt and call for the return of Egypt to its rightful place as “the Mother of Nations” and “the Mirror of Heaven.”              Author:  Robert Bauaval & Ahmed Osman Publisher: Bear & Company Isbn:  9781591431565 Date available: 25th July 2012

KINGDOM OF THE ARK

In this fascinating book author Lorraine Evans reveals the archaeological connections between Egypt and Ireland and tells us the tale of a lost princess who was a member of the Egyptian 18th Dynasty Amarna Royal family and daughter of the Pharaoh Akhenaten and Nefertiti.  In this real life historical detective story Lorraine Evans follows the footsteps of these ancient mariners and investigates the claims that the Amarna Princess Scota fled from her homeland in ancient Egypt persecuted and friendless and landed on the shores of Britain.   By piecing together the archaeological clues and using genetic evidence; linguistic studies and Egyptology the author uncovers vital evidence to challenge the current view of accepted history and unveil the true origins of the ancient British race. This is a fascinating read, and I applaud the author for persevering with her project and standing up to those conventional specialists who may have tried to get in her way.   A treasure for anyone interested in history
Author:  Lorraine Evans Publisher: Pocket Books Isbn:0671029568

THE SEARCH FOR NEFERTITI

Amongst the treasure book of knowledge you are also introduced to Dr Joann Fletchers hypothesis which suggests she had discovered a mummy which she believes to be a member of the royal family of Amarna, the first wife of the 18th dynasty Pharoah Akhenaten, her most gracious Royal Majesty, Queen Nefernefruaten   Nefertiti.  Dr Joann Fletchers book is the perfect travellers guide for anyone who wishes to gain an insight into the day-today  experiences and travels of an exceptional gifted Egyptologist. This rare example of down to earth reporting, where one can almost feel the writers pumped adrenaline as she travels along her journey of discovery and where you can enjoy reading her carefully chosen ante dotes and research which highlights the great Amarna age, its royal family, its ancient culture and its city Amarna “The Horizon of the Aten”.  This book is a must for any ancientegyptamaniac who wants to learn or fill in the gaps of knowledge about the Amarna period. Dr Joann Fletcher is an Honorary Research Fellow at the University of York and a Consultant Egyptologist for Harrowgate Museum. Author:Joann Fletcher   Publisher:Hodder & Stoughton  Isbn:0340831723